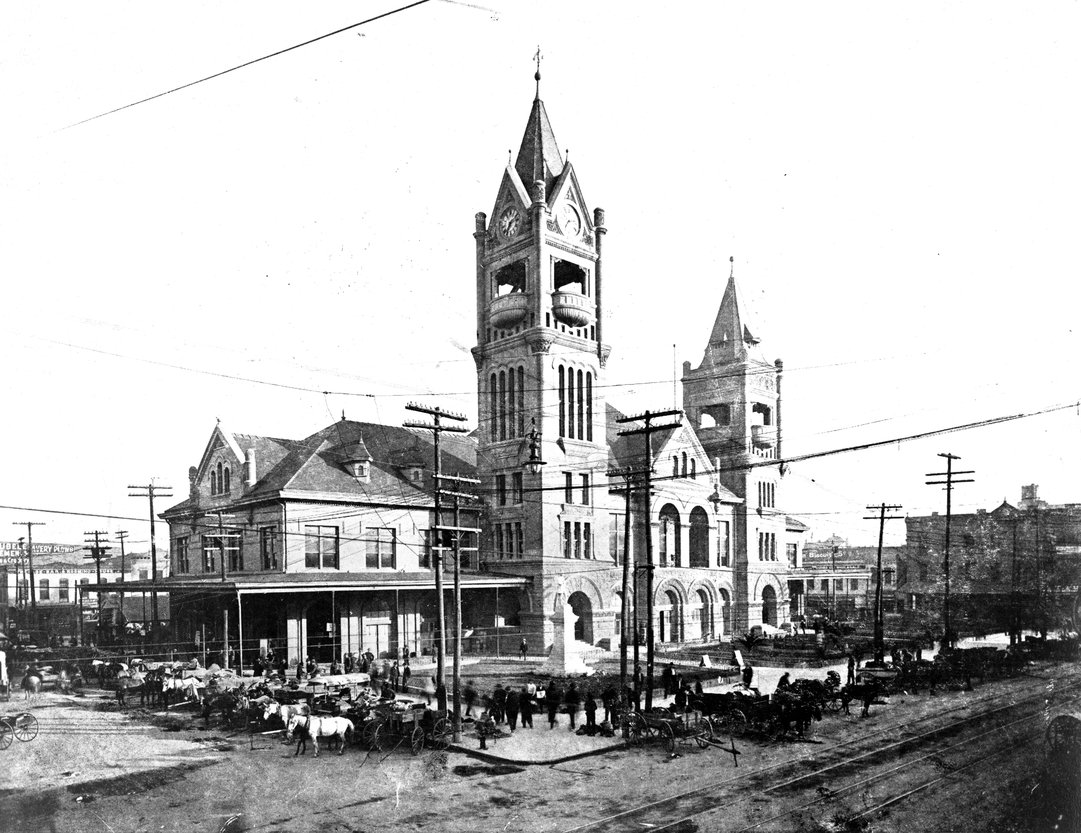 Market Square Park, the original heart of community activity in downtown Houston, is once again the place to be. Combining live entertainment, tasty temptations by Niko Niko’s, shady walkways and dog runs to rival all dog runs, Market Square Park is reminiscent of another era where neighbors gather and enjoy the space they call home.

History
Market Square’s storied past reflects Houston’s own boom, bust, and boom again history.
The Past

The Historic District is Houston's original town center. It’s where the Allen brothers landed, determined to create the city of the future in 1836. Just two blocks from Allen's Landing at Market Square (orginally named Congress Square), they located the civic center of the new city, and for 100 years it served as a home to four City Halls as well as a buzzing open-air produce and fish market.

Market Square burned through three City Hall buildings, with fires in 1876, 1901 and 1960, when the space finally settled as a parking lot for Houston’s party scene. In the mid ‘60s and early ‘70s Market Square was Houston’s soul – full of the day’s hottest nightclubs and restaurants and the place to be for visiting celebrities such as Liza Minnelli and Johnny Carson.

The Junior League of Houston campaigned for the space’s revival in the mid '70s, turning the parking lot into a green space. Not long after, in the late 1980s, the art non-profit, DiverseWorks coordinated a renovation of Market Square Park, planting local artists’ work throughout the space.

And while the oil bust of the '80s and the demolition of some of its most beloved historic buildings left the square (and the Historic District itself) almost forgotten for years, it is making a real comeback today.

Houston Downtown Management District, Downtown Redevelopment Authority/TIRZ #3 and the City of Houston Parks and Recreation Department redeveloped Market Square Park in August 2010, after lending their ears to downtown residents, business and property owners. With these stakeholders in mind, the park has been transformed into a destination for residents and visitors alike, while preserving the park’s historical and artistic roots.

The goals for the redesigned Market Square Park were to acknowledge the history of the site; to provide an active, urban green space adapted to the needs of a diverse neighborhood; and to conserve its existing artwork while incorporating new works of art.

Today, a visitor can follow a black granite band through the park for a tour around the footprint of their foundation. A rectangular lawn sits at the foundation’s center, and the park cafe and James Surls’ Points of View occupy the spaces where the buildings’ towers once stood while framing the present day dining trellis, performance stage and plaza. On the west side of the lawn, a crescent-shaped dog run provides a welcoming place for the canine contingent to play off-leash. Lauren’s Garden, a space dedicated to the memory of all who were lost on September 11, 2001, is named for Lauren Catuzzi Grandcolas, a Houstonian and passenger aboard United Flight 93. Offering a respite for meditation and remembrance, this tribute garden of seasonal plantings, flowering trees, plaza and fountain is a gift to the city from the Lauren Catuzzi Grandcolas Foundation.

Much of Market Square’s art collection was featured in the park’s previous design coordinated by DiverseWorks in 1991, with the unified message of embracing our city’s history. These works by Richard Turner, Paul Hester, James Surls and Malou Flato are preserved or reconfigured in the current design. Newly commissioned artwork includes sculptures by Ketria Bastian Scott and Sharon Connally Ammann in Lauren’s Garden and James Phillips’ carved pup near the dog run.

To create a truly diverse park that can accommodate a growing and diverse community, many great minds came together. Lauren Griffith Associates, a Houston-based landscape architect, led the design and Kerry Goelzer and Ray + Hollington Architects and Tribble & Stephens all consulted on the project and designed a park that was in keeping with history and embracing of the future.