There is an abundance of on-street parking in downtown.  Metered on-street parking is available Monday-Saturday and is free after 6 pm and all day Sunday.  Make sure you feed the meter when applicable and always pay close attention to City signage.  Never park at a red meter or if the street  has red markings.  Milam and Travis streets along the park are also considered mobility lanes so you cannot park there from 7-9 am or 4-6 pm.

How to create a shortcut to our website and parking map to your phone.

Houston BCycle is a "bike sharing" program that shows Houstonians how easy, efficient, functional and practical bike sharing can be! See how it works.

At its core, a public bike sharing system is intended to be used for short trips in and around downtown Houston and surrounding urban areas. Houston BCycle members can pick up a bike at any B-station and return it to that same station or any other B-station when they’re done.  Memberships are monthly or annually. All members have unlimited access to the bikes and with a paid membership, the first 60 minutes are free. Ride time after the first 60 minutes is just $2 for each additional half hour with a maximum charge of $55 a full day. Walk-up/Daily rates are $3 per 30 minutes. houston.bcycle.com 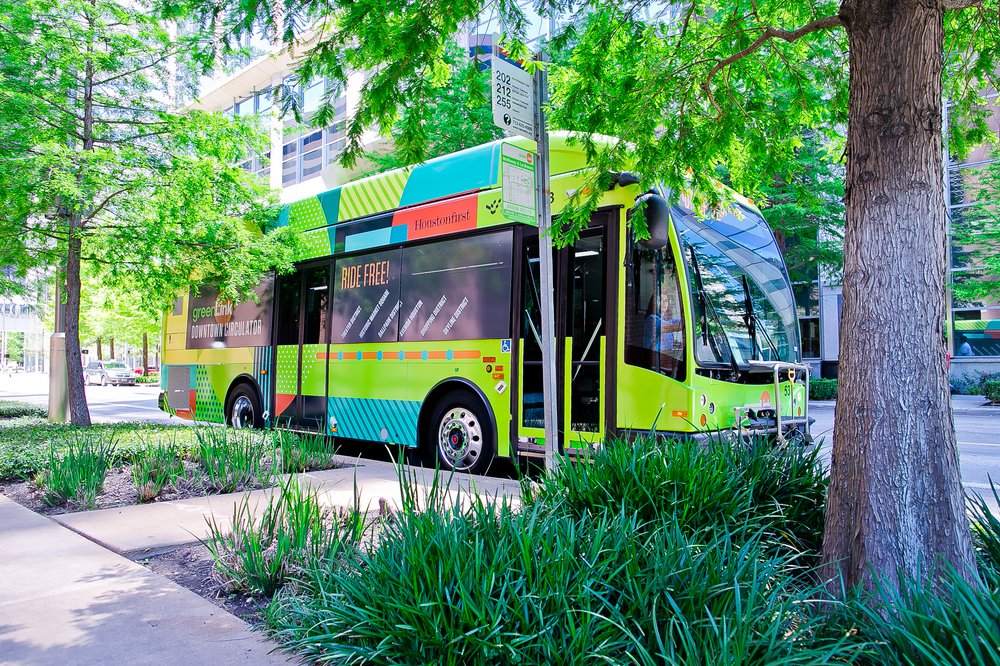 Funded by the Downtown District and Houston First Corporation, and operated by METRO, Greenlink is a free, efficient and environmentally friendly transportation option for Downtown residents, workers and visitors. Since service first launched in June 2012, Greenlink has had more than 1.34 million riders.

Greenlink’s updated routes and extended hours are a direct reflection of Downtown’s growth and development. The new routes touch many of Downtown’s new residential and hotel projects and better serve neighborhoods such as the Theater and Ballpark Districts.

Connecting Avenida Houston and Main Street to the dense office market in Downtown’s southwest corridor, the Green Route will shift two blocks north to Capitol Street to better service residents and guests of the new residential properties and hotels that have opened in northern Downtown over the past year. Its route will also be permanently altered to accommodate frequent detours along Avenida de las Americas, a thriving new entertainment destination. The buses will stop at the north and south ends of the George R. Brown Convention Center (GRBCC), and will also service a covered stop at the Avenida South Garage. The Green Route operates weekdays from 6:30 a.m. to 6:30 p.m., with buses every 7 minutes during peak morning and afternoon rush hour and during the lunch hours and 10 minutes during off-peak.

The Orange Route, which launched in April 2016, will continue to provide service between major Downtown destinations including the Theater District, Historic Market Square, Minute Maid Park, Avenida Houston, Discovery Green, GreenStreet, Main Street Square and City Hall. This route will expand its hours and will now operate Monday through Friday from 6:30 p.m. to midnight, Saturday from 9 a.m. to midnight and Sunday from 9 a.m. to 6 p.m., with buses every 10 minutes. The Orange Route will also permanently shift and loop around Discovery Green, with stops at the north and south ends of the GRBCC and a covered stop at the Avenida South Garage.

One of the many benefits of being Downtown is that you can get around without a car—Greenlink is one of many transportation options for those who choose Downtown to live, work and stay! 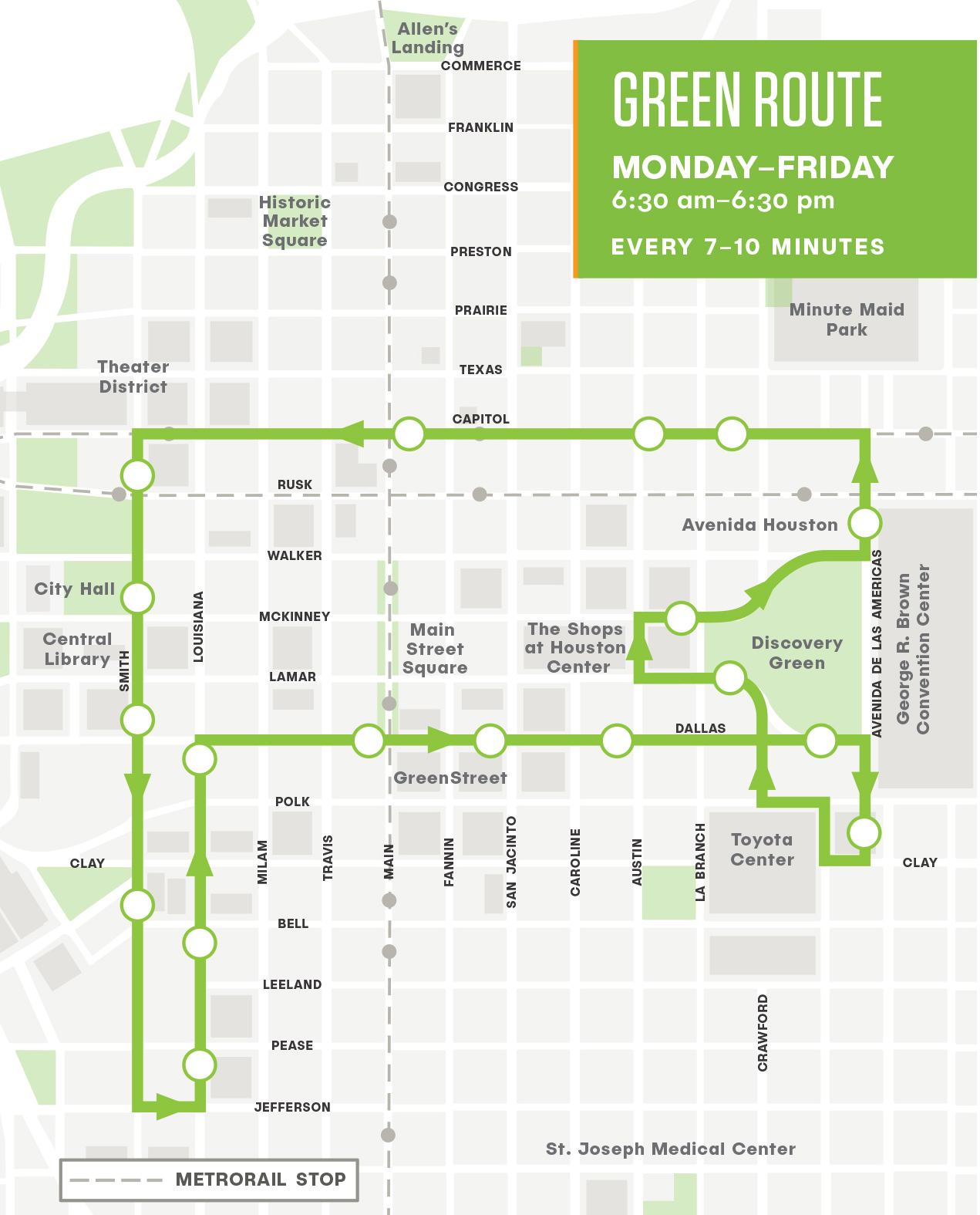 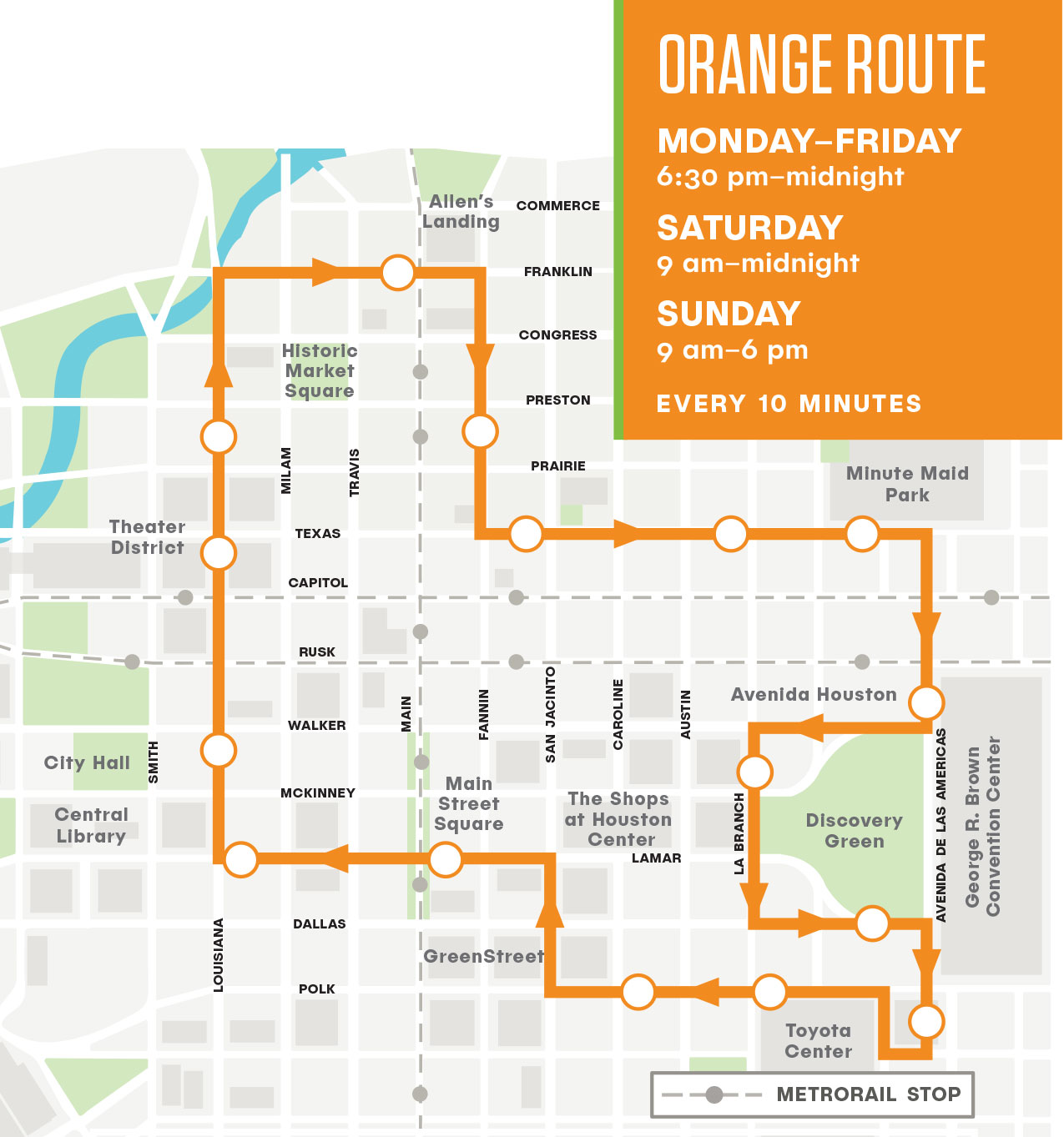